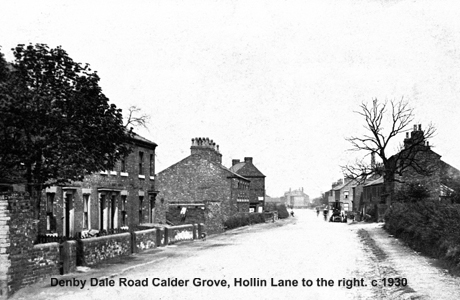 That the Anglo-Saxons once ploughed the fields of Crigglestone there is little doubt. That the land was occupied prior to their settlement is less certain.

The fortuitous discovery of artefacts in the district in recent years in the form of a Celtic head at Chapelthorpe, Early Bronze Age axe head at Kettlethorpe and flint arrow heads on Woolley Edge and Pugneys shows that some form of primitive occupation existed in earlier times.

Unfortunately, nothing dating from the Anglo-Saxon occupation is known to exist locally. Any vestige of their presence was swept aside by the invasion of the ruthless and dreaded invaders from Scandinavia – the Vikings.

Justifiably feared by the Anglo-Saxon settler, their record of murder, plunder and pillage requires little reference here, needless to say that eventually they became the absolute overlords in our region.

Those who survived the murderous onslaught were reduced to slavery by the Pagan invader, lordship of the soil ultimately reverting to heathen ownership.

It is from this period of time that we can, with some veracity, trace our local beginnings. Primarily with the founding of new villages to which the Viking settler bestowed a name, often using the suffix ‘thorpe’ which in Viking terms meant hamlet or village, or ‘tun,’ which meant farmstead. Many of the village names in our parish derive their origins from this period, namely: –

Thus, Yorkshire ceased to be an Anglican Kingdom and became a Danish province.
Within three generations, almost every family of note was Danish by the father’s or mother’s side – so complete was the fusion between the Angles and their conquerors.

The Viking conquest of northern England was complete by the end of the 9th century and following this a form of orderliness, though fractious at times, descended over the region for a period, eventually culminating in the conquest of the Norman King, William, in 1066.

Following the change to Norman Lordship, a new order of government was introduced which brought into being the establishment of the feudal system and in 1086 the great land survey – the Domesday Book.

The survey provided the King with a record of all taxable holdings within his English
Kingdom. Recorded in the book were the numbers of plough teams and amongst other information the rights of common pasture and other manorial rights enjoyed by the local inhabitants.
The Domesday Book records that in ‘Crigeston’ and ‘Orberie’, (the entries are combined), there were four socmen (free tenants), One villein (an unfree tenant, usually annexed to the Lord’s person, to whom he undertook agricultural work in return for a landholding and right to graze on the common pasture). Three bordars with 4 ploughs (A bordar was a villein cottager and one of the lowest ranks in feudal society who had some land for subsistence but was obliged to perform agricultural services freely for the Lord).

It is of course possible that a Norman Chapel was constructed in Chapelthorpe on the site of the present Parish Church. There is little doubt that the village name originated from Viking times and we do know that Crigleston had its own chaplain – Simon. He was party to witnessing documents prior to 1229 and would have served in the Chapel there. All evidence that there may have been of this earlier Chapel was lost when the Old Chapel at Chapelthorpe was demolished in 1771, prior to the erection of the present structure.

Reference to the early Chapel can be found in the Manor Court Rolls for 1314 when it was recorded that: –

‘Margery la Wryghte sues Agnes, daughter of‘ Geoffrey de Newebyggyng (Newmillerdam), for assaulting her in Crigelston Chapel and breaking her head with a shingle’

‘Robert son of Henry de Crikleston is charged with taking a hare in the warren and gives 2/- to be under the surety, of Adam Tulling until the next Court’

One such reference to the action of the Manor Court in Crigglestone is of significant interest. In the Court Roll of 1316, it is recorded that Robert son of Hugh de Chapelthorp was found guilty of : –

‘Cutting down ashes and apple trees worth 8d without permission and
making a ditch in seeking for coals’.

For this offence, Robert had his free land confiscated and was fined 12d. This is a significant entry in that it is the first known reference to mining of any form in the ancient Township of Crigglestone. The above matters were the subject of Manor Court ‘hearings’ at the local court – the Court Leet, which attended to petty offences. This court met twice yearly at the
Manor House (now demolished), which was situated at Little Cliffe in Crigglestone. The Court was presided over by the Lord of the Manor or his Steward. Other duties of the court included the appointment of parish officials such as the constable, ale taster and pinder.

The process of local history is inextricably linked to the history of the country, and though there is little documentary evidence to such occurrences as the Black Death or to the peasants’ revolt in Crigglestone, there is little doubt that both must have left their mark on the community. As we have seen with the Manor Court Rolls, some documentary evidence does occasionally survive the ravages of time. Two such documents relating to Crigglestone are the Poll tax return of 1379 and the Hearth tax return of 1672.

The Poll tax return records the tax, which was levied on fifty of the inhabitants of the ‘Villata De Crigelston’.

The Hearth tax levied a payment of two shillings on every hearth or stove in every dwelling house. There were exemptions to this tax however, including schools, smiths’ forges and bakers’ ovens. The Hearth tax was collected in two instalments, On Lady Day and at Michaelmas.

The return shows that of the 101 dwellings in the Township at that time, two had six hearths, these being the properties of George Ellis and Thomas Pilkinton.

The Medieval history of Crigglestone is, as with any contemporary area, inevitably bonded to the Religious activity there. It is from ancient records relating to the Church that we glean so much of the information on which our study of the past is based.

We know for instance, that following the Act of Dissolution; the little Chapel at Chapelthorpe was closed and for some years used as a cottage. We know that in 1578 Thomas Leake, the Chaplain at Chapelthorpe was teaching ‘scollers’ in his Chapel – his class comprised the majority of the children of the 100 householders in the area.

Church records are also invaluable when physical research is being undertaken, especially in respect of land ownership. Many of our present day field enclosures derive their names from early times, many can still be traced – Endel, Haver Royd and Tan Yard Close are just three of many referred to in our old church documents.

One of the most important surviving historical parish documents is the Inclosure Award and plan of 1799 / 1800. There is much reference in the Award to land enclosures which formed so much a part of the way of life of the parishioners, such as the Great Butts, where all the able bodied men in the village were required to practice their archery; Pithills, where they extracted their coal; Quarry Close where they obtained their building stone, Clay pit, where they dug their clay for brick making and perhaps most enthralling of all – Hanging Close!

The Inclosure Award records the ownership of all land within the Parish, and where let, the name of the tenant. It also specifies the valuation of each individual enclosure of land and its area. The document is truly a local historian’s ‘treasure trove’.

Many other plans survive which demonstrate the vast changes, which have taken place in the parish over the years. Many of these plans inevitably have a mining connotation.

A cursory look at the surface plans of Cliffe Colliery at Painthorpe show how that immediate district has changed, albeit mainly in the past 150 years.

It is a worthwhile exercise using these plans to trace the development of Crigglestone and its ‘satellite’ villages from the mid 1800’s to the present day. Many of the major developments from this period, including mining, railway and other local industrial activities, have been spawned, have prospered and ultimately abandoned during this time. It is a sobering thought, that the mining industry which for so long provided such a local dominance and upon which our fathers and their fathers for many generations before them relied upon for a living, has gone forever.

Our Parish has ceased to be the vast rural area whose expanses of arable and meadowland provided for the livelihood of the farmer and agricultural worker. It has become a district truly Urban in character, probably better defined as ‘commuter land’. If planning development continues in the present unabated trend, it will continue to develop on these lines.

Fortunately we do have a documented record in plan, text and illustrated form of how our environs once were. Let us hope that future generations will forgive any indiscretions we have made along the way in the care taking of their inheritance.