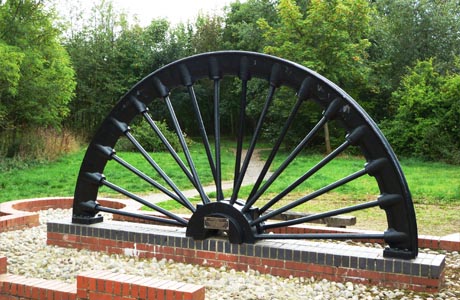 Betty Eastwood Park comprises 10.6 hectares of grass and woodland which is managed by the Parish Council. The Park is used mainly for local walks and has a BMX track for young people and a football area. In October 2005 some of the Park was designated Access Land under the Countryside and Rights of Way Act 2000.

The shaft of the first colliery ‘Woollen Well Main Colliery’ was sunk between 1870 and 1973. Rapid expansion took place and by 1896, 15 coke ovens had been erected. In 1907 a further 55 new coke ovens were added. At their height the Crigglestone coke ovens produced 200,000 tons of coke a year and the colliery employed 977 men underground and 357 surface workers. At the time a by-products works ran in conjunction with the coke ovens producing gas, sulphate of ammonia, tar, pitch, carbolic acid and firelighters.

The coke ovens finally closed in 1959 and were demolished, the flattened site now forming the northern section of the Park. Crigglestone Colliery closed in 1968, with demolition taking place almost immediately.

The park is a mixture of grassland areas and woodland. Most of the mature trees in the Park are oak or silver birch. In the late 1990’s several thousand trees were planted with the assistance of the Forestry Commission. The Park is home to rabbits, hedgehogs and squirrels. At dusk you might catch sight of a bat hunting for insects over the open areas.

The Countryside and Rights of Way Act 2000 (CROW 2000) introduced a new right for people on foot to areas mapped as access land. These are areas across England and Wales of mountain, moor, heath, down and all registered common land. In England 7% of the country is designated open country or registered common land.

Enjoy the land for activities such as walking, bird watching and picnicking. On access land you can walk freely without having to stick to paths. There is no right to take part in organised games or commercial activities, such as racing or to hunt, fish, or collect anything from the area including rocks and plants.

The Countryside and Rights of Way Act 2000 only allows access for walkers but does not affect any existing rights of other users. Public rights of way are not affected by the new right of access or by local access restrictions.

In 2013 the Parish Council was awarded a grant of £5,664 from the Big Lottery’s Awards for All programme towards the upgrading of the informal network of paths in the Park. The project provides cleaner, safer and more accessible routes for all park users. Using recycled materials the project was designed to address comments from local people about the state of the paths and the Council hopes it will make a big difference for the local community and that it will encourage more people to use the Park.

The Friends of Betty Eastwood Park are a group of volunteers whose intentions are to make the Park more user friendly, keep trees and shrubs pruned and tidy, plant bulbs and other flowering shrubs, litter pick and create wildlife habitats. Long term we hope to create a family picnic/play area and develop the pond and BMX track, have more seating and keep the pathways maintained. If you are at a loose end and feel you might be able to contribute in any way, we are meeting in the Park at the Haveroid Lane entrance on Wednesday afternoons at 1pm & Sunday afternoons at 2pm. Come along and meet us, we are a friendly bunch. Join in to create a safer environment for all users and the wildlife. We are in the process of writing bids for funds to enable us to carry out the above. Suggestions from anyone would be gratefully received. We are also looking out for sponsors (local garden centres, landscape gardeners or even local superstores). If interested, please contact Margaret Skinner on 01924 259838. We would like to reassure people that the Friends of Betty Eastwood Park are not destroying the wildlife habitats, far from it we are creating more, while at the same time ensuring the Park is a more hospitable place for families to enjoy a bit of the countryside on their doorstep. A lot of the pruning we are doing is to enable the more established trees and shrubs to survive, because at the moment trees and shrubs are fighting for what little soil there is. We are also planting bulbs including Bluebells, Snowdrops and Daffodils, and by next spring we hope to introduce some more flowering shrubs, all this to encourage insects and birds. There is a plan for more bird and owl boxes. If you’re interested in joining us then turn up on one of the above times or phone Margaret Skinner on the above number.